With the appearance of the 4-inch iPhone SE, Apple seems to change the product strategy - new, older, oldest. This new device has the similar innard of iPhone 6S, which means iPhone SE can provide you with the good performance that you expect. Besides, the design of the device is like iPhone 5S. This device can meet the demands of many people who like the small screen instead of the large screen but expect the better inner components. Because the iPhone with small screen that Apple was released did not have the same innard that can provide people performance that is as good as the iPhone with a large display. What's more, the price of iPhone SE is attractive because it is the lowest device that Apple have ever launched. Want to buy one? Do not be hurry, here we will introduce the main features of the new iPhone to you.

The chip of the device is A9 that is the same advanced chip that used in iPhone 6S. With the beloved design, the powerful 4-inch iPhone SE has the 12-megapixel camera that allows users to capture incredible photos and 4K videos. If you are iPhone users, you may be familar with the Live Photos functions that enables you to take the live photos that record no the moment but a period of time when you take photos.

Speaking of the design, iPhone SE is designed to fit in the human hand comfortably. The popular design provides you the matte and chamfered edges and a color-matched steel logo.

Then let's talk about the A9 chip. It has 64-bit desktop-class architecture and can make the iPhone operation fast. So the users can no longer worry about downloading too many apps and games in your device may lead to slow responce of the device. As you can see the comparation of the performance between iPhone SE, iPhone 5S and iPhone 6S directly from the picture below directly, you can find that the performance is as good as iPhone 6S and twice faster than iPhone 5S.

As for the camera, you can trust the quality of the photos that the iPhone SE is able to take. With the 12-megapixel iSight camera, the users can capture details like what you do with the iPhone 6S. So you can shoot and edit 4K video that is up to 4 times the resolution of 1080P HD video. Besides, the Live Photos that are also supported by iPhone 6S provide users with the live photos with sound and movement. So everytime you see the photos, what you can see is not just a quiet and still image.

This 4-inch iPhone SE can also offer you the other functions and apps like iCloud Photo Library, Apple Pay, LTE and so on. The iCloud Photo Library enables you to upload the photos and videos everywhere and back up them automatically. There is also an advanced security method to protect your iPhone SE - the touch ID. What's more, the Apple Pay allows you to pay the bill with the device at over two million stores. Finally the LTE and Wi-Fi are faster than on iPhone 5S.

Bonus: How to Transfer Files from iPhone SE to Computer (Windows/Mac)?

There will various types of files in your iPhone SE and transfering them from the device to computer has been a problem that trouble many people. Here we will teach you a simple but effective method to perform the file transfer between iPhone and computer. The software is MobiKin Assistant for iOS (Windows/Mac), which can not only support the iPhone SE but also can be compatible with other types of iPhone, iPad and iPod. As we know the iTunes is difficult to operate and this software can be the best alternative to iTunes. Want to have a try? Just download the free trial version of the software by clicking the icons below. And then you can transfer videos, voice mail, contacts, playlists and so on from device to computer. 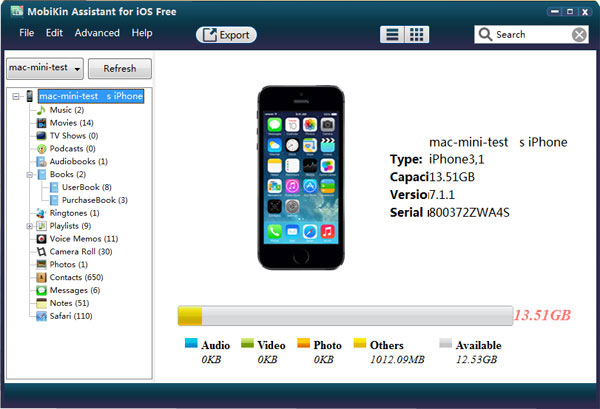 How to Transfer Movies from iPad to Computer/Mac?
Transfer Music from iPod touch/nano/shuffle to Mac/Computer