Home> Resource> iOS Transfer> How to Update iOS 8 to iOS 9?

Firstly, the Proactive Assistant Siri will be more proactive and smarter than in iOS 8. For example, if you ask Siri to remind this later, Siri will detect the apps who are running and try to understand what this means. What's more, Siri will also be faster and more accurate.

Secondly, Apple pay is also expanded and it has made its way to the United Kingdom now. It has been backed by many banks and credit and debit card.

Thirdly, the better and more tolerable Apple Maps will offer you the detailed route including buses, metro and even the ferries.

How to Back Up Files on Computer?

Before the update, you'd better make a backup of your important files on computer in case the files may be lost after the update.

Step 1. Download the MobiKin Doctor for iOS (Win/Mac) by clicking the icons below.

Step 2. Connect your iOS device to the computer with the USB cable and launch the software. You will see an interface like this with many options list on the panel.

Step 3. Click the wanted option on the left panel to preview the details on right panel. Mark the files you want to keep and click the Export button on the top. 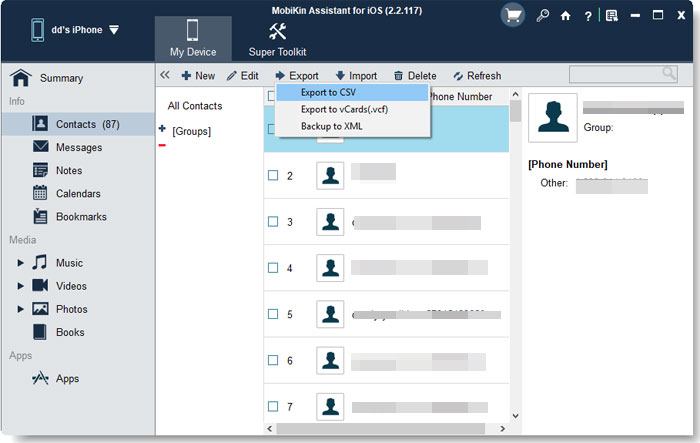 Steps to Update iOS 8 to iOS 9

There two ways for you to install iOS 9. Method 1 is to download the iOS 9 on your device directly and you should make sure there is enough space on your storage card. Method 2 is to download and install the iOS 9 via iTunes on computer. By the way, make sure the battery life is above 60% in case that the device is out of energy during the updating process.

Step 1. Head to the Home screen of the device and tap on the settings app.

Step 2. Tap on the General button.

Step 3. You will see that there is a 1 next to the Software Update option and that means there is a updating version available. Just tap on it. If there is not any number next to the option, you can still tap it and then the operating system will detect the phone to see whether there is update available.

Step 4. Tap on the Install button after a new interface popping up. Then the new operating system will be downloaded and installed.

Method 2. Use iTunes to install iOS 9

Step 1. Connect the device to your computer via the USB cable and then launch the iTunes if it does not start automatically.

Step 3. If you do not see the interface, you can click on the device icon and then select the Summary tab in the left column. Then click the Check for Update button in the left column and the software will find the update if it is available. And you can install the iOS 9 on your devices easily.