How to Transfer Apps from iPhone to Sony Xperia

Copying apps from iPhone to computer as backup is easy as long as you have a professional iOS to PC transfer program like MobiKin Assistant for iOS Free. It is tested by lots of iPhone or iPad users and has gained a good reputation as well as many compliments on the market. With it, you can transfer apps from iPhone to computer for free. More data like videos, contacts, notes, call logs, reminders, voice memos and so on can be synced as well.

If you are an Android user, for example Sony Xperia, you can export apps from Android phone and save them to the computer as backup with its own transfer manager or other alternative software. It seems like not a problem to transfer data between smart phones and computer. But it's not the same if you want to transfer apps between smart phones, especially between different operating systems.

Recommended Tool to Transfer Apps between iPhone and Sony:

Admittedly, there are a variety of programs that has the ability to transfer apps from one smart phone to another, but Mobile Phone Data Transfer is the one you won't be disappointed about. It's a standalone third party program, specializing in helping users to transfer apps from iPhone to Sony Xperia or from Sony to iPhone. Besides, if you have more data to copy, you can transfer videos, photos, contacts, SMS, and call logs and so on between these two smart phones.

You can download a free trial Windows or Mac version and install it on your personal computer and then follow the guide to transfer apps from iPhone to Sony or from Sony to iPhone in the next section.

Compatible devices and transferable data for your reference:

Attention: If you haven't installed iTunes on your PC yet, remember to download and install it on your computer, or the program won't detect your iPhone and you can't take further steps.

Step 1. Launch the Program and Link the Devices to Computer

Run the software after the installation, and then link the iPhone and Sony phone to the computer with USB cables. You'll see a window shown below, then you can choose the mode "Phone to Phone Transfer".

The two smart phones will be placed as the source device and destination device randomly. If they are in the right positions, you can go on. The data that can be transferred are in the middle of the window. Tick "Apps" and click "Start Transfer" so you can transfer apps from iPhone to Sony Xperia. 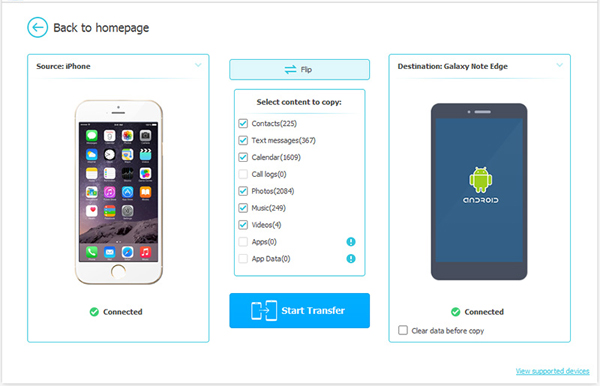 Tips: Not only that, you are able to transfer apps from Sony to iPhone as well if you click the "Flip" button to switch their positions.

Get the iPhone Data Recovery to restore the deleted or lost data from iPhone to your computer.

How to Transfer Data between Android and iPhone 6/5S/5

How to Copy Apps from Nokia to HTC Easily