How to Transfer SMS between BlackBerry and Sony Xperia

Since the messages function was developed in smart phones, fewer and fewer people would like to write letters. Years before, people wrote cards to notice of some upcoming special events or wrote letters to their friends or relatives far away from them. But now they can send text messages to communicate with each other instantly without waiting for a long time.

Most important of all, sending SMS can sometimes release the embarrassment of making phone calls when people aren't willing to tell orally. As we all know, some messages have crucial information at times and you need to keep them from missing. Once you replace your old phone with a new one, these SMS messages should be kept safe. Today, we are going to make an example of how to transfer SMS between two smart phones.

Assuming you need to transfer SMS between BlackBerry and Sony Xperia, first you should know that they run different operating systems, and to make it, you need a phone transfer program equipped with a high compatibility. So Mobile Phone SMS Transfer is the phone to phone transfer software we kindly recommend. You can transfer SMS from BlackBerry to Sony or from Sony to BlackBerry in just one click. Other files like videos contacts, call history, photos and music are within the range transferable. Apart from Android and BlackBerry OS, more devices with Symbian, iOS and Windows operating systems can be supported by this tool in the same way.

Now get the powerful program and then begin your SMS transmission between BlackBerry and Sony Xperia smart phone.

Question: How to manage Android data on computer or Mac?

How to Transfer SMS Messages between BlackBerry and Sony Xperia?

Download the correct free trial version on your computer, then install and launch it according to the instruction. Then you'll see an interface here. Then connect the BlackBerry and Sony devices to the computer. After that, you can select "Phone to Phone Transfer" mode and click "Start" to go to the next step.

There are different modes in the interface, choose "Phone to Phone Transfer" and continue. 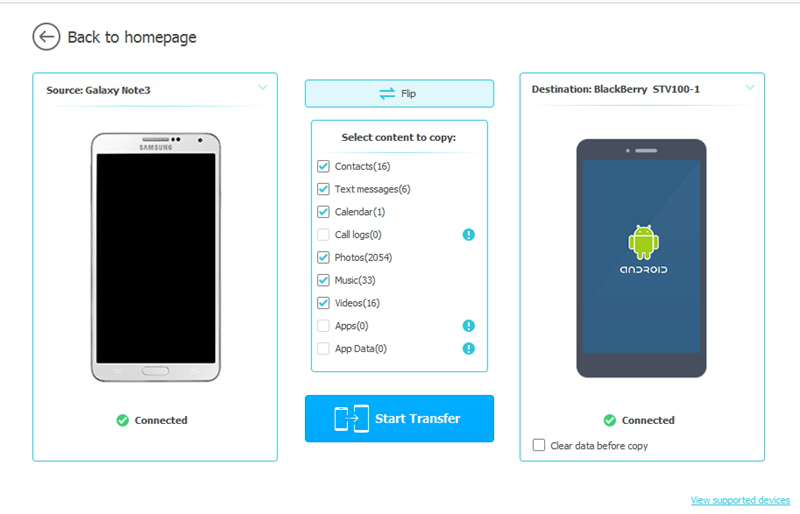 Step 3. Transfer SMS from BlackBerry to Sony or from Sony to BlackBerry

The BlackBerry and Sony phones will be placed as the source and destination devices, if they are in the wrong positions, you can click "Flip" the put them in the right places. Then tick "Text Messages" in the middle menu and hit "Start Copy" to transfer SMS between BlackBerry and Sony Xperia. 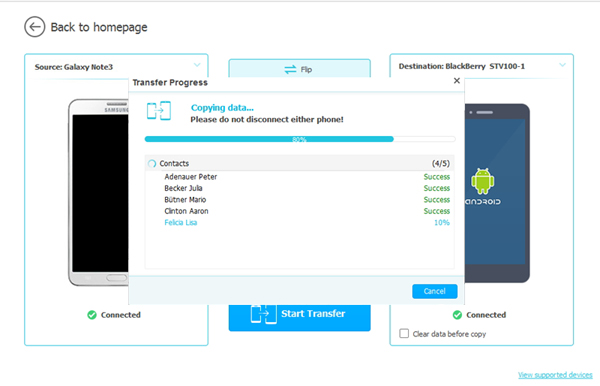