Retrieve Deleted Music from iPad on PC or Mac

Q: After Apple has released iPad, fewer and fewer people would like to spend several bucks to buy CDs that only contain a couple of songs. For music fans, iPad has changed a lot. They can download a huge number of songs on their iPad and those songs could be a big fortune to them. However, the music on iPad can get lost due to lots of reasons such as iOS update, accidental deletion, failed transferring, factory settings reset, synchronizing with a different iTunes music library, virus attack and so forth. So is it possible to restore the deleted music from iPad completely?

As the most well-functioned tablet pc, iPad has earned a large number of users throughout the world due to its multifunction- it can be a computer, MP3 player, video recorder and camera, etc. Let's take MP3 player for example here. Many people like to download and play songs on iPad for its large capacity. However, most users get to lose some songs when they are trying to remove some unwanted ones. That is to say they sometimes inadvertently delete songs they love.

One Click to Transfer Music from iPhone to Computer for Free

So what action can they take to save this unfortunate situation? In this case, they need to retrieve deleted music from iPad. But how to complete that? You have 3 methods to get back the wanted files:

Sync Music with iTunes from Computer to iPad

iTunes is an official service designed for iPhone/iPad/iPod users to sync their files. So if you have saved your wanted songs on iTunes library or computer, you can go to iTunes to sync the songs from computer to your iPad. But here you should know that you can only sync the free songs with this means. Now let's learn how to sync music with iTunes from computer to iPad.

Step 1. Use a USB cable to link your iPad to computer and then run the latest iTunes after the connection.

Step 2. Click on the iPad name at the top right corner to load the files on the device.

Step 3. Next, you can tap on the menu and select Music from the drop-down menu.

Step 4. On this page, you can check the Sync Music box and tap on Apply to sync the songs from iTunes library to iPad. 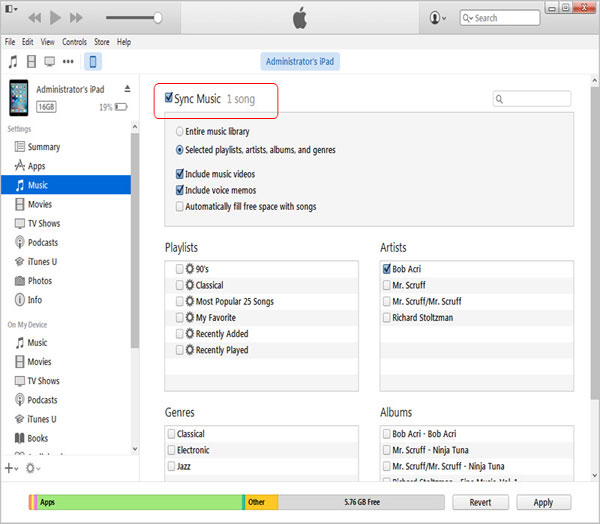 Step 2. Next, you should choose the Purchased option from the list.

Step 3. Then you need to click the option Not in My Library. After that, you can customize the list by using filters and choose the songs that you want to restore.

Step 4. At last, you can simply tap on the download icon at the top right corner of the song or album to start downloading the files.

iCloud is another official cloud service to sync files on iOS device. Hence, if you have sync the songs to iCloud beforehand, you can choose to get back your iPad songs from iCloud also. In this part, we will show you how to retrieve lost iPad music from iCloud. Follow the steps below.

Step 1. To restore a backup from iCloud, access the iPhone settings app and select General.

Step 2. At the bottom of the General page, select Reset.

Step 3. Choose the second option to Erase All Content and Settings.

Step 4. When the phone restarts, select the Restore from iCloud option and restore to the appropriate backup. 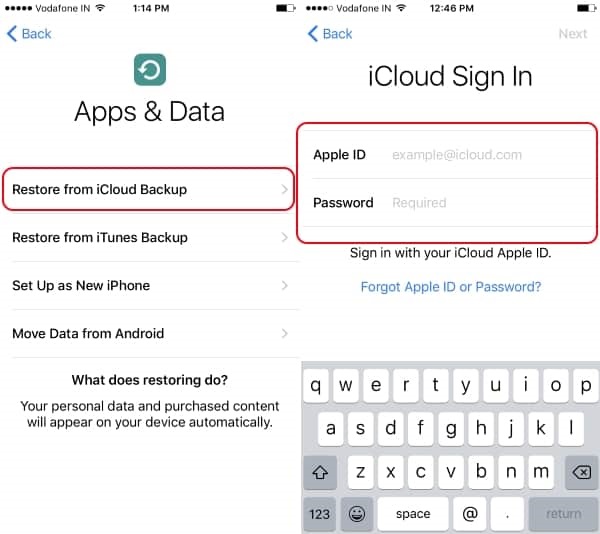 Although you can restore the deleted songs after losing them, these methods do not always work and you would lose them permanently. So in order to avoid this issue, you'd better backup your wanted files on iPad regularly, including music, pictures, videos, contacts, messages and so on. This won't be a hard task and you can make use of MobiKin Assistan for iOS (Win & Mac) to complete the backup process without any hassle. Now you can click the icon below to download the software on your computer and then go with the instructions to backup music or other files from iPad to computer.

How to Recover Deleted Photos from iPad Air 2/Air/Mini