Tricks to Transfer Contacts from PC/Mac to Samsung

If you are fond of Samsung devices, I guess you have already bought the latest version of Samsung smart phone - Samsung S8, right? After you got the new phone, the first thing that you would probably do is to transfer all the phone numbers and other contact information to your new Samsung phone. However, to transfer the stored contacts from computer to a mobile phone or transfer them to a computer for backup is too difficult for most of the users. Therefore, we are glad to show you how to transfer contacts from PC or Mac to Samsung in details.

To transfer contacts from PC/Mac to Samsung S8/S8 Plus, the method we offer here is to ask help from MobiKin Samsung Contacts Transfer (Windows/Mac) which is of great efficiency. Apart from transferring contacts between Samsung and computer or Mac, you can sync other data such as music, photos, apps, text messages, books and files on Samsung devices with your computer without any hassle. Aside from Samsung smart phones, other Android cell phones including Sony, HTC, Motorola, LG, Google Nexus, HUAWEI and ZTE, etc. can be supported by the software. Now you can get the free trial version to have a try. The software has Windows version and Mac version available. You are here recommended to download the Windows version on your computer since we are about to show you the instructions on the Windows version. (For iPhone users, you can go to here to learn how to transfer contacts to iPhone X/8/7/6S/6.)

How to Transfer Photos from Mac/Computer to Samsung Galaxy

Here is the detailed tutorial on transferring contacts from computer to Samsung:

Step 1. Link your Samsung smart phone to the computer or Mac via its USB cable. Then launch the program after the installation. After that, you can enable USB debugging by following the onscreen prompt or click the link to learn more detailed steps.

Then tick the "USB debugging opened" option and click "Next" to install USB driver on your computer.

Step 2. To transfer contacts from PC to Samsung, you can select the "Contacts" and preview the items on the right panel. Then click "New" to add a new contact info to your Samsung device, or you can click "Import" button to load contacts backups to Samsung device at one time. Besides, you can export the contacts from the Samsung device to the computer as well by clicking "Backup Contacts". Other data like music, videos, apps, books and photos can be transferred between Samsung and PC/Mac. 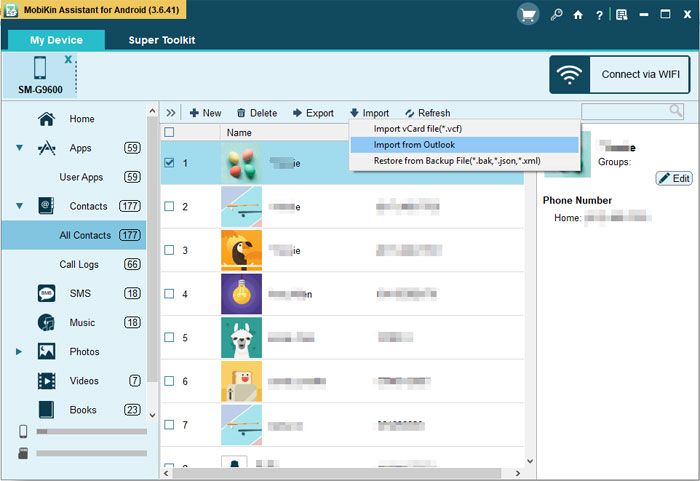 How to Sync Contacts to Samsung Galaxy with Mobile Transfer?

Mobile Transfer is not a simple Phone to Phone Transfer program on the market. It also works well as a Android backup & restore program. With it, you can directly backup contacts from old phone to computer and restore the backups to any Android device as you like. What's more, this program have a Mac version for your reference. So, you can use this program to transfer contacts to Samsung devices from computer or other phones as you like.

Below is the primary window of the Mac version:

Tips to Transfer Videos from Samsung to Computer

How Can I Edit Samsung Contacts on PC/Mac

How to Transfer Contacts List from Samsung to Computer