How to Transfer Photos from Samsung to Samsung? [Ultimate Guide]

Photos are crucial for all phone users because they store memories and specific information inform of business card photos, downloaded images, and screenshots. For this reason, Android users might want to know how to transfer the pictures from their old gadgets to their new upgraded devices, say how to transfer photos from Samsung to Samsung. Some photos are also very private and moving them to the latest gadget is the only way of ensuring that they do not land on the wrong hands. 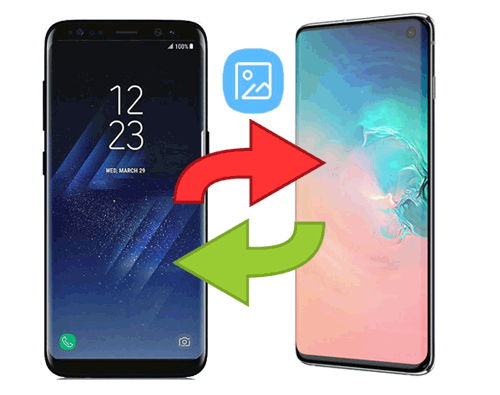 Phone transfer might seem like a challenging task and especially if it involves large volumes of data. However, the transfer process can be made easier using the following methods:

Part 1: How to Transfer Photos from Samsung to Samsung with Mobile Transfer (Recommended)

Using MobiKin Transfer for Mobile is one of the easiest and the fastest means of transferring photos and other files from one Samsung device to another. Another advantage of using this Samsung Photo Transfer software is that it does not require any professional skills.

* It is fast since files are transferred with just a simple click.
* It allows Android and iOS users to selectively move data between one device to another.
* It supports different brands of mobile phones, including Samsung, Huawei, Xiaomi, Sony, etc.
* The software supports the transfer of photos, apps, music, videos, contacts, text messages, call logs and documents.
* It ensures secure transfer process since it does not have adware, malware and any other type of virus.
* For Samsung devices, it is compatible with almost all models, including Samsung Galaxy S10/S10e/S10+, Samsung Galaxy Note 9/Note 9 Plus, Samsung J3/J3 Pro, Samsung Galaxy A9/A8/A7/A5, Samsung Galaxy Tab S4/S3/S2, Galaxy Tab A, and etc.

When using this Mobile Transfer app, you can follow three significant steps:

Step one: install and launch the program

Install and launch it on your computer. You might see the primary interface of it.

Step two: connect the two Samsung phones to the computer

* Use a USB cable to connect the two Android devices to the Mac or the personal computer at the same time.
* The connection can also be created by connecting the two devices to the same WiFi network in case the USB option is not successful.

Step three: transfer the photos between the Samsung devices

* On the middle panel of the program, different files are listed.
* Tick the "Photos" folder, and click the "Start Copy" option to start moving the files.
* Once the data transfer process is complete, a notification will appear on the screen. 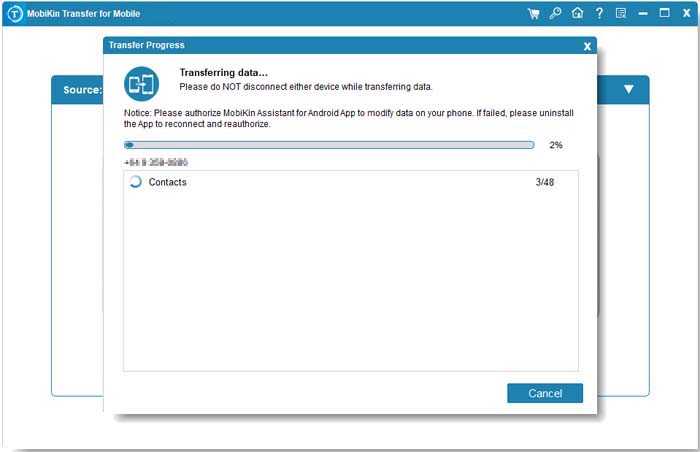 1. The connection between the two Samsung phones must not be interrupted until the transfer process is complete.
2. The two mobile phones must be placed in the correct positions during the transfer. The source phone should be on the left side while the destination phone should be on the right side. If not, click "Flip" button to change the position.

I would recommend all Android phone users to use the Mobikin Transfer for Mobile to transfer their photos from their old Samsung to their new Samsung gadgets. The program makes the whole process fast and easier.

Part 2: How to Do Samsung Photo Transfer with Android Assistant

The MobiKin Assistant for Android can also be used to transfer photos from one Samsung to a different Samsung phone. One of the best things about the Android assistant is that it has the backup and restore feature that allows Samsung phone users to back up their pictures in the source phone and restore them in the destination phone.

Additionally, the transfer program also supports moving contacts, apps, music, messages, and other files. The following are the steps involved in moving photos from one Samsung gadget to another.

Step one: connect the Samsung phone to the computer

* Ensure that you have downloaded, installed and launched the Android assistant (the Android version) in your computer.

* Use a USB cable to connect the destination phone to the personal computer.
* The program will automatically detect the device.

Step two: backup the photos in your Samsung phone

* On the interface that appears on the screen, select the "Super Toolkit" option.
* Click on the "Backup" icon.
* Select the "Photos" option on the pop-up window
* Choose the preferred storage location for the backup files on the computer.
* Hit the "Back Up" button, and the backup process will begin. 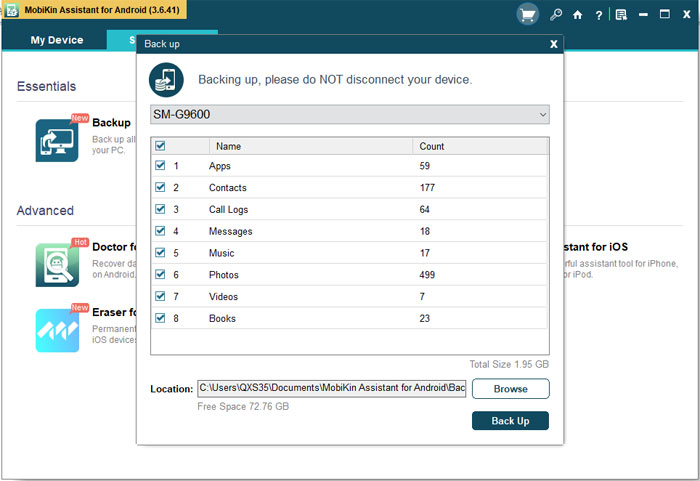 Step three: restore the photos in your destination phone

* Once the backup process is complete, disconnect the source phone and connect the destination phone to the personal computer.
* Click "Super Toolkit" then the "Restore" option to select the photos you backed up.
* Click the "Restore" button to restore the pictures in the preferred phone. 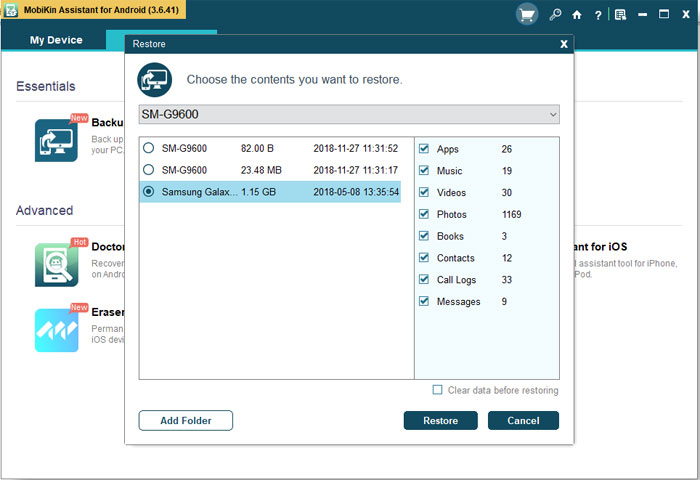 With just one click, all the photos that you wanted to move will be transferred to your new Samsung phone.

If needed, here are more ways on how to transfer photos from Samsung to computer >>

Part 3: How to Transfer Photos from Samsung to Samsung with NFC

The S beam is an innovative feature that helps the Samsung Galaxy users to move photos between phones. For this feature to be more effective, one must combine the Near-Field Communication (NFC) and the Wi-Fi Direct. The role of the NFC is to initiate the transfer process which involves the following steps.

Step one: enable to S Beam on both gadgets

* Scroll down to the Settings option app in your phone and then enable the S Beam.
* Enable the NFC in both phones, and they will connect automatically

* In this step, go to the images that you want to move and bring the phones close together.
* Click on the "Tap to beam" on the prompted screen, and the transfer process will begin automatically. 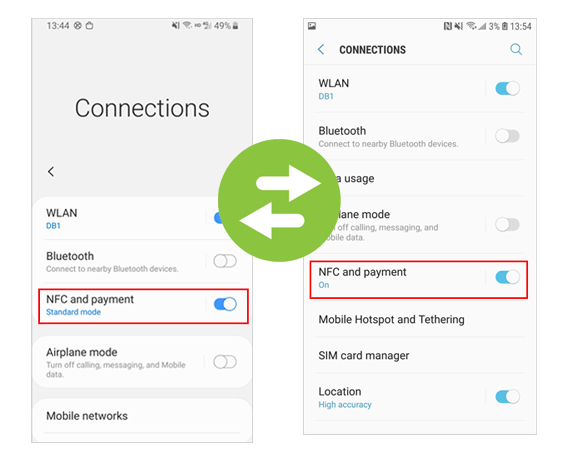 Part 4: How to Move Photos between Samsung Phones with Dropbox

Dropbox is a cloud storage service for moving photos to the cloud. Once you have transferred the images to the Dropbox, you can access them from anywhere as long as you have an internet connection. The entire process is made easier by the camera upload feature found on the Dropbox app.

Check how to do it:

* Step three: tap on the Gear icon to open the phone Settings.

* Step four: choose the photo file that you want to transfer, and they will automatically be uploaded in your account. 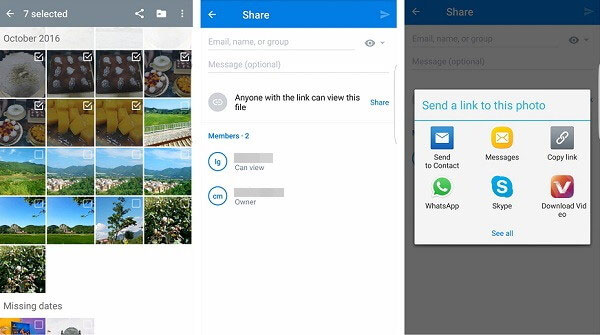 Part 5: How to Share Photos between Samsung Phones with Bluetooth

Bluetooth allows users to transfer data within a short distance freely and without using cellular data. Both mobile phones must have the Bluetooth feature.

* Step two: Create a connection between the photos by pairing them. 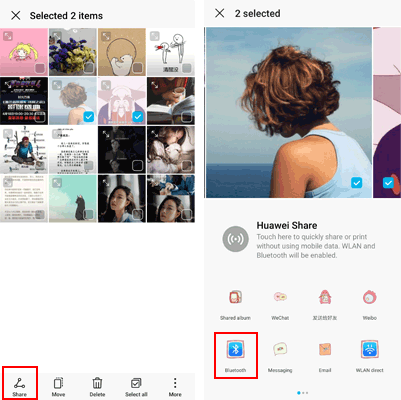 Part 6: How to Copy Photos from Samsung to Samsung with Cable Transfer

By using the Samsung Smart Switch, Samsung users can also transfer photos from one phone to another by using the standard USB cable. Ensure that the Smart Switch mobile transfer is installed in both devices.

See how to make it:

* Step one: Place both phones close together.

* Step three: On your source phone, highlight the photos that you want to transfer.

* Step four: Tap on "Receive" in your destination phone. 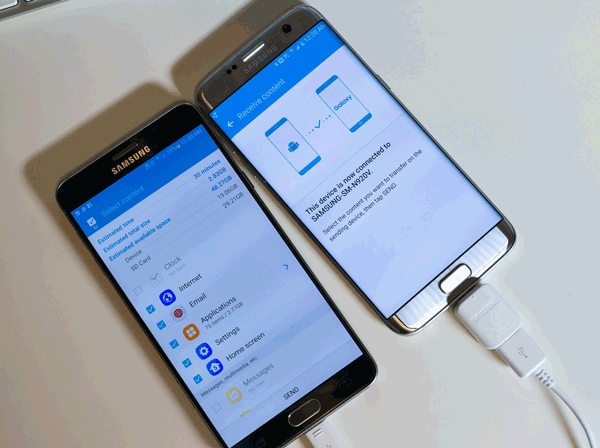 Part 7: How to Transfer Photos from Samsung to Samsung with Samsung Smart Switch

These days, transferring photos from one Samsung phone to another does not require USB cables. Using the Samsung Smart Switch Mobile app is an easy and fast method of completing the process. All you need to have is a Google account.

The following are the steps involved:

* Step one: Install and launch the Samsung Smart Switch mobile app in both Samsung phones.

* Step two: Place the two devices within a 50cm distance and click on the "Connect" button.

* Step three: On the listed files, select the photos you want to copy.

* Step five: Tap on the "Receive" option on the destination phone to accept the transfer. 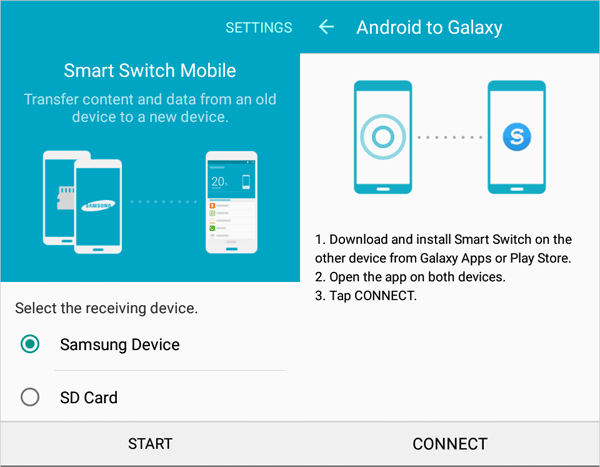 There are many situations that might force you to transfer your photos from one Samsung phone to another. For example, you might be upgrading to another new phone, or your old gadget might be running out of space. The above are some solutions that can make the process easier. Choose the one that suits you best.

How to Transfer Photos from iPhone to Samsung